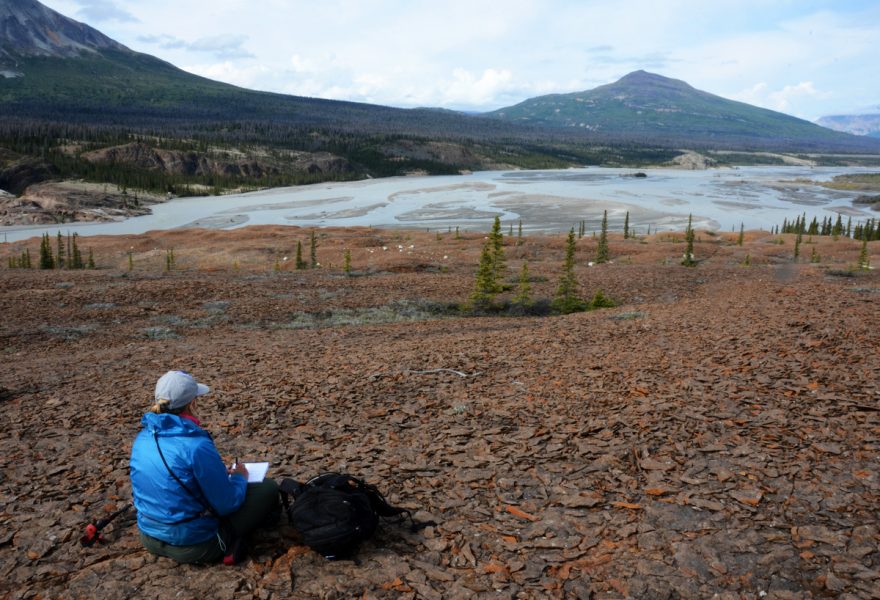 This August I embarked on an adventure – a rafting trip on the upper Alsek River with Canadian River Expeditions.   I had saved for this trip for a few years as a 50th birthday present to myself but then Covid struck and everything was cancelled.  However, on July 31st Yukon opened its borders to B.C. and NWT residents so the rafting company put together a custom trip for locals that stopped short of the Alaskan border.  Within a couple of weeks I had to wrap my head around the fact I might actually do this.

People have since asked me, “was the trip as good as you expected”?, but I don’t think I knew what to expect in the first place.  I was just really drawn to the idea of visiting what sounded like a magical corner of the world – virtually untouched and with the most glaciers anywhere outside of the polar regions. The Alsek River starts in Kluane National Park (not far from Haines Junction, Yukon) and flows through the B.C. border into the Tatshenshini/Alsek Wilderness Area.  This area became  popular in the 1990’s when there was an intensive campaign to halt a copper mine proposal. The movement was successful and in 1994 the area was designated a UNESCO World Heritage site.

I was a little nervous upon heading out –  about the grizzlies (the area is a grizzly sanctuary) and about being so remote and out of reach particularly from my son after having been with him so constantly since March.  The river is also dangerously cold and with some serious rapids.  My friend summed it up before I left:  “just make sure you stay in the boat Tracy”.  However, once I was on the raft I felt strangely calm and unworried about anything.  Like “worry” in general was just not a thing here.

As I floated carelessly down the river,  in a giant blue raft steered by a friendly and extremely capable river expert,  I tried to soak in this mind boggling landscape that is in continuous flux and shaped by very active natural processes – the Lord of the Rings movies came to mind a few times.  On one side of our camp at Lowell Lake there were floating icebergs the size of giant houses that had calved off Lowell Glacier which would sometimes roll over making noises like thunder;on the other side we heard rumbling rock slides as Goatherd Mountain behind us was apparently growing at the same pace as our fingernails.  There were eight of us in total and if you zoomed out just a bit we were easily just tiny insignificant dots on the landscape.

I was fascinated by the many different types of rocks I saw that told stories of a past that I could only vaguely understand but appreciated the magnitude of.  At one point, there was flaking lava rock that looked like piles of orange wasa crackers as far as you could see.  Other rocks were peeling open  like pages in a book, striped like butterscotch ripple icecream or in the form of jagged silver walls. There were fist-size bright pink rocks, deep piles of gravel glacier moraine at the mouth of creeks, dunes of impossibly fine untouched sand (that we weren’t allowed to touch either) and white “drop rocks” that the glacier picked up from some far off location and dropped in a new spot, looking like unknowing intruders or uninvited guests.

There was also lots of grizzly activity and we saw numerous prints in the mud but thankfully the bears kept their distance, often hurriedly scaling impossibly steep cliffs to get away from us.  We also saw arctic terns, goats, eagles and curious fat ground squirrels (one of the grizzlies favourite snacks).

Time I think has a different meaning in an untouched place where major processes of nature are so visible.  Years don’t really mean that much, instead changes are marked in millenia.  Being there for only seven days was verging on meaningless, except maybe for an egocentric human who hangs around earth a mere 80 years or so.  The guides called returning back to civilization after a wilderness trip “reentry” as in: “Reentry always feels so weird”.

I think that what I most appreciate about trips, is a renewed perspective on life back home.  A short week on the Alsek River gave me the exhilarating feeling like my very soul had been cleansed and filled up at the same time  – as if I had been through a natural process as well.  I felt noticeably more aware of and connected to nature.  Upon my return home the first thing that caught my eye were the tops of the fir trees swaying in the wind waving to me like old friends.

Above photo by: Malcolm Johnson – I’m sketching the Alsek while sitting on the “wasa cracker” lava rocks