On Nature's Good Side at the Bowron Lakes 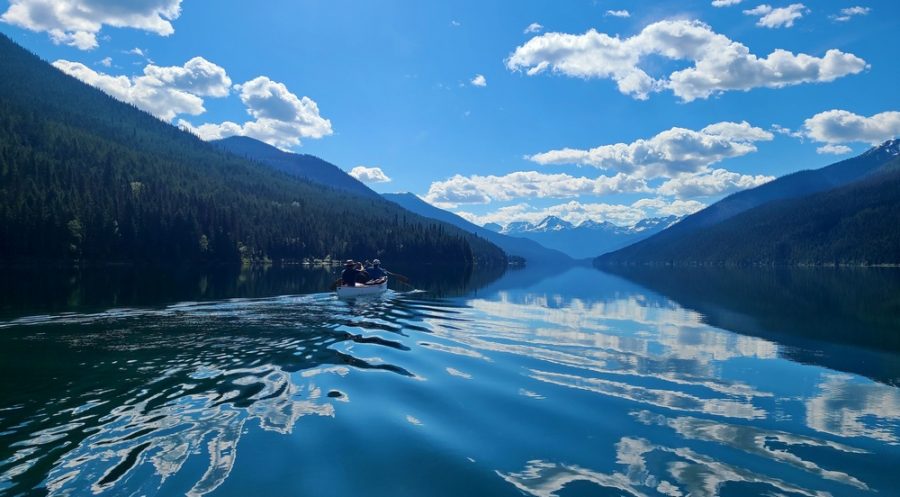 I was sitting at a table by myself in the Wells Hotel café, the morning after completing a family trip on the Bowron Lakes Canoe circuit, writing in my journal.  At the table next to mine, a family of ranchers was casually discussing the intelligence but also evil cunning of ravens which recently learned how to take down a baby calf by pecking its eye out so it will bleed to death.  Just typical rancher stuff.

Thankfully we did not experience the cruel side of nature on our Bowron Lakes trip which my son, Arlo, my husband, Warren and I did with a “mirror” family of three.  We enjoyed good weather, amazing views and experienced no animal attacks.  Canoe trips are new to our family so I was grateful that our companions were canoe experts – especially Paul, who has numerous stories about growing up in Ontario and leading summer camps of younger kids on multi-week long paddling trips with basically just a giant block of cheese for food.

The Bowron Lakes are a chain of five long, skinny lakes organized in a tidy trapezoid, situated east of Quesnel, near Wells/Barkerville.  The entire circuit is about 120km long and it takes about five days to complete.  It is run by B.C. Parks and you have to sign up for a spot.  Canoeing this circuit has been on my bucket list since I saw a presentation by photographer Chris Harris at the Island Mountain Arts Centre in Wells, years before.  He had recently published a photographic book about the lakes (which he had paddled, sometimes solo, about 100 times).  I remember his serious tone when he told the audience, “you have to go there”.

At the start, our plastic barrels and dry bags were weighed by a B.C. Parks ranger on a giant scale.  This was to make sure we weren’t going to be dragging too much weight on the portages and ruining the often-muddy trails.  After a quick orientation we started off, pushing our three fully loaded canoes on carts, up a hill on one of the longest portages, thinking “this better be good”.

We were soon rewarded, and after a few short lessons on how to steer, so the boys would go straight, we could feel the freedom and ease of travelling on water.  To me what would prove amazing was spending five days moving from one spot to the next and not seeing a clearcut, road or a house (other than a dilapidated trapper’s cabin or parks shelter).  It really felt like travelling back in time – this may have been exactly how the landscape looked to those on the Gold Rush or Indigenous hunters before that.

We finished some long days of paddling feeling like our arms were going to fall off (or maybe that was just me) and with sunburnt legs where we missed with the sunscreen.  However, once our camp was set up and we were sitting down to one of our gourmet meals such as sausages and vegetables fried up with hashbrowns and goat cheese, around a campfire and listening to a couple of loons laughing back and forth across the lake, we were okay.

Perfect days followed.  In the mornings the water was super smooth like blue silk in which we were reflected in psychedelic patterns.  Fueled by a breakfast of eggs, bacon and hashbrowns, we were together alone in a giant wilderness heading off to some distant spot at the end of the lake.  There was the joy of having nothing else to do but paddle.  The sun was warm, so we could pull our boats over if we saw a secluded sandy beach to go for a swim.

At Lanezi Lake we were surrounded by the Cariboo Mountains, wearing the last ragged patches of snow of the season.  Clouds would advance, threatening a change in weather but then subside again leaving us with more clear mornings.  However, there was a promise of swampier and buggier areas ahead.  The last two days we busted out our stylish bug hats for the evenings and mornings in camp.  Sure enough, where there are bugs, there are often moose and we passed a mother and her calf lying nonchalantly in the grass not far from our boats, unimpressed with our little adventure.

After five days in the wilderness you start to change, you become a bit hardier – you get used to your thermarest.  This trip was long enough to test my stamina, including how long I could go without a proper shower (you are not allowed to use soap in the lakes).  Though I thought maybe we are becoming an “indoor” species (like indoor vs. outdoor cats). We had so much food with us that we didn’t have to hunt or fish; quick dry clothing, and comfy trucks waiting to take us back to our comfy houses.  We lucked out with good weather.  This was not anything compared to the physical discomforts our predecessors would have definitely endured.  After the Bowron Lakes adventure, I thought about how we have been saved from the brutalities of nature and certain gruesome deaths, but at what price?  Partly I think it is not having as many chances to test or fortify our spirits – and see who is reflected back.