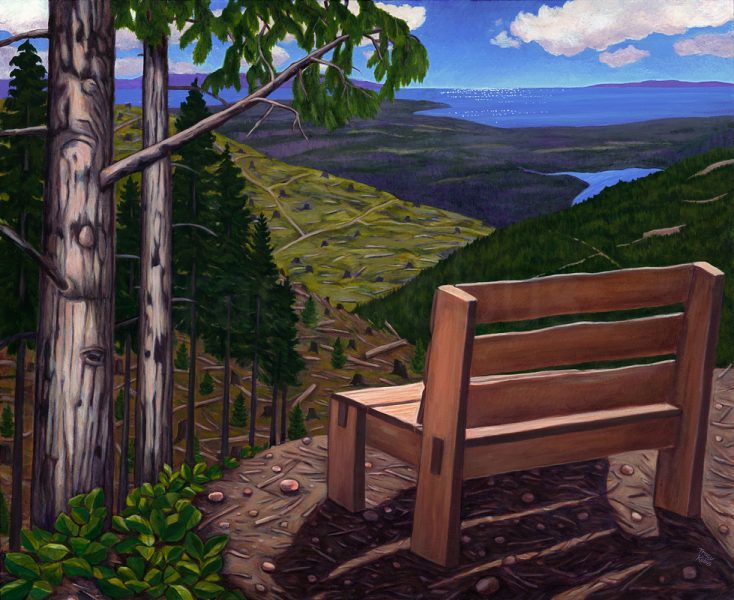 Quote:  “There is a saying among the peoples of the Northwest Coast: “The world is as sharp as the edge of a knife,” and Robert Davidson, the man responsible for carving Masset’s first post-missionary pole, imagines this edge as a circle. “If you live on the edge of the circle, that is the present moment. What’s inside is knowledge, experience: the past. What’s outside has yet to be experienced. The knife’s edge is so fine that you can live either in the past or in the future. The real trick,” says Davidson, “is to live on the edge.”  ― John Vaillant, The Golden Spruce

The recent changes we’re living through and also reading a book on Haida Mythology caused me to reflect on when I saw Haida artist,  Robert Davidsons’ solo exhibition:  ‘Eagle of the Dawn” at the Vancouver Art Gallery in 1993.

At the time, Davidson’s carvings, sculptures and masks struck me as possessing almost a supernatural quality, most likely forged from his rich life experience. His work also held so much mystery about a tradition I somehow knew so little about.  At the time I was doing my Fine Arts Degree at UBC and living on campus.  My classes were based on postmodern conceptual art which I found cerebral and cold.  In contrast, Davidson’s forty years worth of work, made in natural materials was based on myths and stories.  It may have stirred up some nostalgia for living on the island while feeling out of touch of nature living in the big city.  Then I read his quote on the gallery wall that said “the world was as sharp as the edge of a knife and that the trick was to live on that edge”. (quote above).   Within the context of his beautiful artwork, this quote captured my imagination – it described to me how to feel fully alive and stayed with me for a long time after.

Reflecting on this quote again, I think “the knife edge” between the past and future is where true creativity lives.  Some think creativity is only painting, drawing, dancing or making music, but I think it is really also about living.  Who we are and the time we find ourselves in, give us the parameters within which we create our individual life.  Parameters aren’t always bad.  In the end, I don’t think it is a question of how do I control my circumstances as much as how do I choose to BE in changing times?  Being creative may simply mean being curious instead of judgemental, not worrying too much about the future and learning to listen better to our own inner voice and those around us. I think this awareness (creative pursuits often help increase our awareness) is what walking on that edge of the world is and experiencing that is a gift.