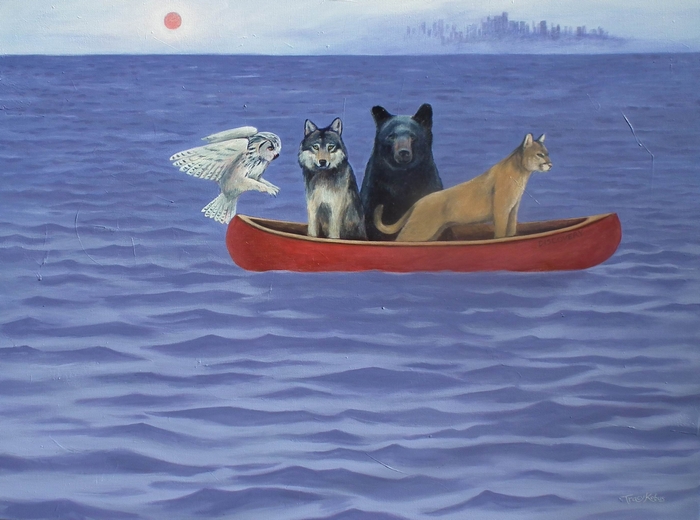 As a child I remember how much animals captured my imagination – I saw them as potential yet often elusive friends.  I wanted to be an animal doctor when I grew up until I almost fainted watching our vet stick an very long q-tip unbelievably far down my cat’s ear.  After that I decided I would be a wildlife artist, painting out in the field while staying camouflaged behind a blind like Robert Bateman.   I was eight – a lot has changed since then but my respect for the animal world has stayed the same.

David Abrams in his novel “Spell of the Sensuous” writes about humans as just one small part of the sentient world.  In this world we see other forms of life, but they are also observing us:  “We may cast our gaze downward to watch the field mice and the insects that creep along the bending grasses, or to glimpse the snakes that slither into hollows deep underfoot, yet, at the same moment, hawks soaring on great winds gaze down upon our endeavors.”

Sometimes I do wonder how I look to a fish I have swam by, a bee that has landed on my hand, or a robin calling from my garden fence. Wild animals have learned to rightfully fear us.  I imagine many animals perceive us as pretty weird; always making strange sounds and without any cool feathers, fur or scales.  We may sometimes be fun but are often preoccupied with nonsensical activities, always going different places and with unlimited sources of food.

Animals show us that there are many different ways of perceiving and being in the world.  They lead the example of how to follow our natures and be who we are, without apology.  Pets hone our skills in empathy, tolerance and patience – as anyone who has ever owned a puppy will know. Through animals we also come to learn about mortality and we wonder if they in turn understand what death is.  They show us how to be in the moment and not worry about some far off future.

In a world we share with so many other entities, it’s good to try to get outside our mostly hairless skin and imagine the world from the eyes of our many numerous furry and feathered friends who have inherited some pretty fascinating means of survival.  We may come to realize that despite our cleverness, we have many limitations.   I think humans would be better off not seeing ourselves as the center of the universe and to think of animals as our teachers.